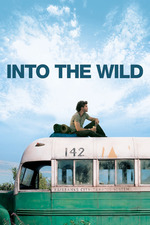 No longer to be poisoned by civilization he flees, and walks alone upon the land to become lost in the wild.

Into the Wild is based on the true story of a man searching for the ultimate freedom; Chris McCandless should be an inspiration to all of us, as he was brave enough to get away from this growing consumerist society, and live in the wild.
Stories about men running away from society have always fascinated me, because I myself think about that a lot of times. There's a lot of pressure, imposed by parents, teachers, friends, magazines, advertising, in order to have the best clothes, the best car, the best phone... but, as McCandless said, these are just things. Why can't people actually give a shit about what really matters? I totally understand Christopher's rage against society, because it is a serious and worrying problem, but seemingly nobody cares about it.
Into the Wild may have its flaws (confusing chronology, mainly), but it's one of the richest films in content I've ever seen. I cried several times, not because things were sad but because they turned out to be more beautiful than I expected them to be, quoting Alain de Botton.
Emile Hirsch's portrayal of Christopher McCandless is flawless: the energy, the positiveness, the belief are always present, before and after his escape. Sean Penn's work is masterful, he really captures and transmits the essence of this story. Some of his decisions suited perfectly, such as the soundtrack, but his storytelling could have been a lot better. There are moments of simple beauty, too good to put into words. Moments you really wish you could be experiencing (but of course you can't), so that you could feel strong and okay about yourself.
Eventually, after meeting different people, and affecting (positively) their lives, Christopher comes to the conclusion that the greatest experience of all: life and happiness that arises from it must be shared: happiness only real when shared.
Into the Wild is the ultimate philosophical experience, watch it with an open mind and a wild spirit.