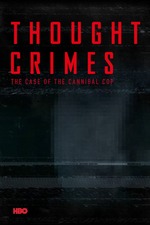 Thought provoking (but don't think too much!) doc that gives a very even handed account of the Case of the Cannibal Cop.

There is certainly people like me who's immediate, knee jerk response is "The guy should be allowed to think whatever he wants to!" but it's hard to completely dismiss some of the "real" evidence that was presented by the prosecution. Though he was essentially writing "a fantasy work of fiction" with himself as the lead character on a fetish website, there were moments that were mirroring his real life. Did he visit an old school friend because he was fantasising about eating her, or did he fantasise because he knew he'd be visiting her soon?

As a avid reader of horror fiction who enjoys Edward Lee, Wrath James White and even dipped my toe into Dennis Cooper (and immediately withdrew that toe! That stuff was nasty!), I would be appalled if anyone tried to prosecute these writers for what they thought. But Thought Crimes asks enough questions about whether it was fiction or forethought in this case, that it makes for a very compelling watch rather than feel that you're being editorialised to.