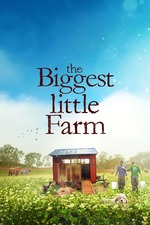 ☆"Everyone told us that this idea was crazy, that attempting to farm in harmony with nature was reckless, if not irresponsible."☆

John and Molly had a farm.
E-I-E-I-O.
And on that farm they had sustainable agriculture using regenerative principles to maintain peaceful coexistence with the complexities of nature.
E-I-E-I-O.

Trust me, this song will catch on.

Emmy-winning filmmaker John Chester moves with his wife Molly and dog Todd to start a new farm in California using progressive yet simple techniques, hoping for a diverse and sustainable 200-acre plot on Ventura County land thought previously inarable. In The Biggest Little Farm, an eight-year project is documented by the couple with all the trials, tribulations, and rewards that come with such an ambitious and naive attempt. Audience Award winner at the Palm Springs International Film Festival and the American Film Institute Fest, this engaging and lively picture will give you hope for how humankind can work with nature in innovative and responsible ways.

John essentially quit the film business after being evicted from his Santa Monica apartment with Molly and Todd -- Todd's kind of a barker -- and had no intention on coming back. Professional videographer John and chef and food blogger Molly just wanted a new purpose. Starting the farm didn't mean John had any intention to make a lively film -- it was Molly's idea anyway -- "because what were we going to say?" he opined. "We had no experience farming. What was the story going to be? Would it work out? Was it a pipe dream? Was it real? Was it plausible to farm with a restored ecosystem?” Naturally, after filming it all anyway, the documentary is a rousing success.

Looking towards agricultural savant Alan York for information and his blessing, the Chesters learned how to incorporate biodiversity at Apricot Lane Farms, as opposed to the industrial monoculture. "The objective is to emulate a natural ecosystem," Alan suggests. The key? Microorganisms from composting and natural fertilizer, and all of this biodiversity will lead to a self-sustaining farm. At least, that's the plan.

The film chronicles the uplifting triumphs and crushing setbacks of their adventure. Some are expected and some are genuinely shocking, good and bad. And yes, there are many many adorable baby animals (and adorable adult ones too!), making this informative and educational film also great for your little ones; at just 91 minutes, it breezes along and feels nothing like some afternoon Discovery Channel schlock. From Emma the pig -- with 17 piglets! -- to Mr. Greasy the rooster, every animal has a beautiful and lively story. Some are just solutions to problems: chickens eat maggots, owls eat gophers, ducks eat snails (who knew?).

The cinematography is gorgeous, though of course a lot of it is from drones John uses to watch the farm. (It's funny, 25 years ago a lot of that was breathtaking; now pretty much any schmuck's videos can look like the Planet Earth series.) Still, on the big screen it's quite magical.

Packed with interesting twists and looks at a way of life many never get to see, this is what documentary filmmaking is all about.

Added to The Best Documentary Films of 2019.
Added to I Call Dibs! (Films I’ve Logged Before All My Friends)