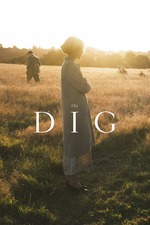 ☆"Mark my words: I won't receive any credit, and I won't even be a footnote."☆

Ah, sexy archeologists, such a movie cliché. From Indiana Jones and Lara Croft to (eventually) Nathan Drake and the face-sitting in Ammonite, we want our professors of fossils and burial remains to have CrossFit bodies, kill Nazis and monsters, and shag an assistant on the side. But even though Simon Stone does cast the conventionally attractive figures of Carey Mulligan and Ralph Fiennes in The Dig, this is a charming film simply because the true story it's telling is so good that it doesn't need any Nazis, mummies, or Nazi mummies. The script tries its damnedest to mess it up, though.

British working-class archaeologist Basil Brown (Fiennes) isn't planning on making any big discoveries in 1939. He's probably more worried about rising tensions on the continent. But as other scientists are packing up and scaling back, he presses on in search of meaningful digs. An unlikely one comes in Suffolk, when the wealthy widow Edith Pretty (Mulligan) kindly asks him to explore mysterious mounds on her property, of which she's been interested for years. What could be there? Others in England have found old human remains, or small pieces of relics, or sometimes nothing. This dig however, on a site which came to be known as Sutton Hoo, yields an incredible bounty: an entire ship, the burial place of an Anglo-Saxon king, and evidence of ancient dwellers far more sophisticated than previously thought.

The hot summer makes for a long dig, but also an exacerbation of Mrs. Pretty's chronic illness, which she has hidden, is likely to befall her in time. But she and Mr. Brown press on -- especially as her sweet young son Robert (Archie Barnes) takes to him like a father-figure -- and a throng of on-lookers and professionals come, including Stuart Piggot (Ben Chaplin) and his wife Peggy (Lily James). Though, when deemed a nationally significant site, representatives from the government come to take over the dig. As Brown is pushed aside, he seems resigned to his anonymity. But history comes calling, and he and Mrs. Pretty are determined to see the dig through.

Screenwriter Moira Buffini adapts this story from the historical novel by John Preston, itself very much based on facts. And though it very quickly gets to the namesake project, then the story drags its feet a great deal as it turns to a battle of David and Goliath: the amateur excavator and the British museum interests. And in come more supporting characters with backstories that are thin and underdeveloped, including the aforementioned husband and wife team -- you see, Lily James is wearing glasses and dirty pants, and has no product in her hair, so she's just horrifically unattractive now -- with marriage problems. What? Basil Brown disappears for a while and it's to the film's detriment. As well, an important motivation for Mrs. Pretty is her father, of whom she took care for many years before his death, and skipped university (and archaeological study) to do so. We hear and infer this in just a few moments, and it was worth more… digging. Sorry.

A shame, as the acting is competent and again the story itself is fascinating, especially as this crucial find totally reshaped ancient history in Britain with regards to its original inhabitants from 1500 years ago. This point isn't emphasized enough -- except for some canned lines by the lead archaeologist -- but it forever changed the perception of the previously undervalued Anglo-Saxons, from marauders to cultured. If you wish for a better film about an amazing discovery in the Earth, naturally there's a documentary for that, the excellent Secrets of the Saqqara Tomb, which does have mummies, and mummified kitties.

Friend who wrote a better review than me: Ewan Gleadow.

Added to The Narrative Films of 2021, ranked.