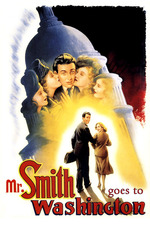 Even as a Finn, something in me has bought the mythical past of the US and wants to see the US as it tries to sell itself. It's clear that it is not what it presents to be but I wish it could be. I wish the image of "ideal American" (I hate the term "American" to refer to people from the US but it's hard to avoid without sounding clumsy) could actually inspire "Americans" to be that way instead of giving them a chance to fall to their delusions. Capra tries to deconstruct it to show that it's every "American's" birthright to be "ideal American" but that it takes effort, it takes awareness, it takes proving yourself.

It might not be as simple as that even considering how twisted the US system is and how it wants to be everywhere to tell everyone how to live. And of course, the image of "ideal American" is very often white, based on the reality of white people of the country, ruling out everyone else. The reality might be that there is no "ideal American". But I still want to believe in it and it's hard not to when Capra has built such an angry but beautiful film. And I absolutely love the fact that it came during an era when Europe was filled with fascist governments. "We must be better" feels real when it comes to a time of self-deception. Capra comes from a place that presumes that the US was built by great men, false of course, but perhaps there's truth to the myth? There must be some truth if it helps us become better?

I want to acknowledge my position but sometimes film just takes you with it and complicates this position. Cinema has the ability to lie and twist reality but I want to believe that there is something real in it. That it is not just lies and ideological tools. This film brings me to the core questions that I face when I watch films and love cinema. There are moments when we must believe that the people can make a difference, that the people want to change the world for the better. There are people who do not understand this and I wonder how sad their lives might be. They are afraid to be wrong and think that their position can save them from it. Capra's ethos might be too idealistic or broad to some but I think it echoes remarkably today as well. Because Capra believes in a person like Jefferson Smith, I want to believe in him too.