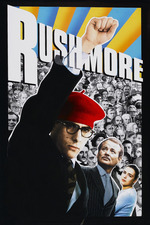 Maybe the greatest testament to my self of a few years prior's stupidity (and what a fitting film to have grown on). I actually had seen the first hour of this before the stream cut out on me (always watch the entirety) and I never bothered to finish it out of sheer hate for the character of Max and what was perceived as...an insufficient meanness to him by the others. Or something.

Wes Anderson's primary recurring theme is age, or more specifically time and circumstance's influence on a human being (or stop-motion animal). This forms the backbone of his adeptness at character study. His diorama aesthetic typifies a romanticized picture frame, a frozen moment. In his two best films, Rushmore and Moonrise Kingdom, the character or characters' charmed worldview his pastel Norman Rockwell metacritique frames is a distinctly youthful outlook.

Anderson's method of conflict is to pit characters who don't share the gaze of the camera against the characters that do. In both these films, that means adults vs children, respectively. But that ignores the characterization of the "antagonist", which is often just as developed. It's as if there's a middle ground-Eden that the youths are rocketing towards so fast they miss it and drift off into the jaded space of the adults. Anderson generally arcs his films towards an encroachment on that place, a narrative trait stemming from the youthful idealism, but the skepticism of the aged is played savvily enough to abate a pure "happy ending" while still allowing earned optimism.

So briefly on what's more specific to Rushmore: The gaze of and at the protagonist is remarkably complicated. He's precocious, condescending, entitled, mean spirited, and can't reconcile his remarkable organizational talents into more substantive priorities. He is easily the most obnoxious person in the film, so when the film gives him what he wants it's a bit puzzling. But when he's deprived of his outlet early, the reasoning behind this becomes apparent: The inherent schadenfreude is now welded to legitimate tragedy, as we see a myriad of great but ultimately useless talents (Wes customarily poking fun at his own kinks) suddenly wasted. In the gaze of the film, Max's, this is the end of the world. The thing he had "found that he loved" and "resolved to do until he died" is lost. But this hermetically sealed fantasy is completely transparent, so the empathy built by forcing us into Max's perspective is skillfully built upon a base of sheer loathing.

This exploration of human difference combined with the economic critique further enriches the inquiry, questioning the implications of this cinematic solipsism when it's forced to transmigrate across structures as insular as socioeconomic groups. This ending suggests that coexistence is possible between these worlds known as people, no matter their race, ethnicity, creed, ideology, religion, etc, however briefly. It's a glimmer of hope and a call for change in one, which is a thing of beauty, and the type of rhetoric more political advocates could stand to emulate.

Before I close I want to quickly touch on two more specific filmic elements, Anderson's use of music and his slomo. Anderson does not allow his worlds to crumble formally, but he does allow the story told in sound a brief glimpse of an "objective," or rather an audience's reality. The technique used to do this is allowing his anachronistic, cheery, 60s pop songs, often made by now-dead people, that mirror his character's shortsightedly optimistic worldview to be eventually displaced by more contemporary music in climactic scenes of despair (much of this argument is culled from the ever-great Vadim Rizov's Fantastic Mr. Fox piece). His slomo occupies his most fleeting emotional moments in an effort to preserve them even more than the rest his still life aesthetic can (the ending of this film and the hand kiss after "marriage" in Moonrise spring most quickly to my mind). It's not TOO unique a part of his cinematic language, but in the context of his approach it speaks volumes.

Frivolous and poignant, jaded and hopeful, irritating and droll, and beautifully contradictory in every other way. Where this one will be in another Sight and Sound Poll or two's time will be interesting.

UPDATE: Uh...Ok so I went back to check and this received NO votes in the 2012 poll. Tenenbaums received two and it was his only film to receive any.