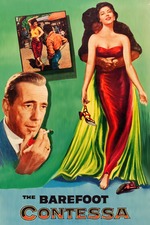 That statement is true as far as it goes, and in a couple of places, THE BAREFOOT CONTESSA goes even farther, with lines like “any self-respecting script would have had me going on a bender” and “what do you want to know, my motivation?” But lines like that appeal to a standard (life-like realism) that a film like this just cannot meet. Nobody expects BICYCLE THIEF from this director and cast, but THE BAREFOOT CONTESSA is, and I don’t mean this in a pejorative way, 200-proof Hollywood gloss. And thus “life doesn’t have to make sense” just comes across as special pleading for some … well, howlers.

I dunno about you but if I knew I were unable to function as a man in bed, I would tell my wife long before our wedding night (maybe I just have unusual integrity). Even apart from that, you can’t say “life is like that” when there’s just as many lines in the film inviting comparison to fairy tales — Cinderella and the constant references to shoes, for example. Indeed, the film commits the cardinal sin of chewing with its mouth open, constantly name-dropping dramatic structures, pointing out plot points but without breaking the fourth wall and integrating textuality into the film, as THE MUPPET MOVIE did.

There is another problem with THE BAREFOOT CONTESSA — a huge one. You cannot make a movie about a director and his discovery of a great dancer and star (the basic premise of this film) and then cast in the central role a woman who cannot act. I’ve got two good eyes — I can see that Ava Gardner is a sex bomb, but that’s really all she is. (Indeed, I suspect this might have had something to do with the Cahiers crowd flipping for this; they can’t have appreciated Mankiewicz’s dialog, the film’s principal virtue, but only accessible to us Anglophones.)

Mankiewicz seemed to realize Gardner’s shortcomings — there’s even a line where director Bogart tells her “if you can act I can help you be better; if you can’t nobody can help you." So Mankiewicz resorts to what I call the Esther Kahn conceit — we only once see her do a gypsy dance (not bad, to be fair) and not in the club where she’s “discovered.” And never do we see her on a film set, much less actually acting (even in her screen test, which we’re told is awesome in one of the film’s best scenes). Andrew Sarris once unfavorably compared CONTESSA with LOLA MONTES in terms of subject matter and structure, but the films also are comparably saddled with weak actresses in the central role. Ophuls gets his way around it with directorial panache and working Martine Carol’s awkwardness into the film’s subject matter. But Mankiewicz mostly just tries to ignore it, rather than transcend it, and he isn’t remotely the visual stylist Ophuls is. Indeed, for a film about film-makers, CONTESSA is remarkably uninterested in cinema, except in the sense that the National Enquirer gossip counts as “cinema.”

Nor is Gardner the only shaky performer — and Mankiewicz is too much of a bright-dialog writer not to be dependent on actors. And it sometimes works here, though he falls into his habit of speechifying. Warren Stevens as the first tycoon, in whose employ Bogart finds Gardner, has “silver spoon” looks but no menace or voice (fatal in the “Goliaths” showdown); Marius Goring as the Latin American (stop laughing) playboy is a toothy embarrassment; and flunky Edmund O’Brien’s sweat became the first body fluid to win an (inexplicable) Oscar. Only Bogart, wearing the cynicism of CASABLANCA a bit more world-wearily and wittily than then, and Rossano Brazzi as the Italian aristocrat manage credibility.

THE BAREFOOT CONTESSA is not a total waste (I also saw it for free, at the National Gallery of Art). As I said, the film’s primary virtue is Mankiewicz’s dialog, still bright and brittle after ALL ABOUT EVE and A LETTER TO THREE WIVES. Jack Cardiff’s cinematography gives the colors pop, even in scenes enveloped in darkness. You do get to look at Ava Gardner a lot (she’s a wonderful clothes horse). And the structure of shifting narrators (the film is framed around the memories of three men at Gardner’s funeral) keeps the film nimble and short-feeling, even at 130 minutes. But even there, you’re more reminded of better films in that vein (one even written by a Mankiewicz).