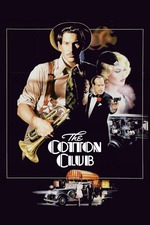 I thought I'd dig into some of Coppola's less celebrated films after the Godfather Coda in the hope that time had been kind to at least some of them, and sure enough, his follow-up to the commercially underwhelming Rumble Fish was similarly slept on upon release but saw a gradual reappraisal that culminated in a re-edited and expanded director's cut appearing a few years ago. Even in this version which was considerably better received, it is easy to see how it might have been difficult to find an audience, especially in the mid-80s. With a tone comparable to Cabaret but centred around Harlem gangsters instead of Nazis (even taking place during the inter-war years), it kinetically shifts between highly stylized, aesthetically detailed mobster politics and sharply choreographed musical numbers, increasingly blurring the lines between narratives as the performers, attendees and everyone in between become more and more connected to and affected by the violence behind the scenes. Its frank depiction of the racial politics of the period would probably ruffle feathers in wide release today without context, as the film seems more interested in sweeping the viewer up in the atmosphere than making any sort of comment on the true crime which inspired the story. Setting that aside, if you want to see a great ensemble cast and a near-unrecognizable Richard Gere in a baroque feast for the eyes and ears that was sorely overlooked in a decade of video nasties, 'super action' and buddy cop inanity, it certainly delivers on that promise.