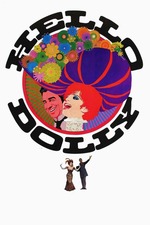 The movie was antiquated upon its theatrical release. HELLO, DOLLY! came out in 1969. America was entrenched in the Vietnam War, the counterculture was at its apex, Janis Joplin and Jimi Hendrix were top record sellers, and disillusionment was the vibe of the day. Then this lavish and extravagant throwback to Hollywood musicals, directed by none other than Gene Kelly (the star of so many of those musicals) comes to the theater and people did not know what to think.

HELLO, DOLLY! is remembered as being a huge flop that almost bankrupted a studio. For a little context let me take a second to look at the top grossing films of 1969. #1 (and by a huge lead): BUTCH CASSIDY AND THE SUNDANCE KID - a anti western with as nighlistic of an ending as you will find in American cinema. #2: MIDNIGHT COWBOY a tale of male prostitutes, AIDS victims before that was even a thing, hustlers, pimps, drugs, and the greatest example of platonic love ever caught on screen. The ending of the film is heartbreaking and tragic. #3: EASY RIDER - the grandfather of independent and countermeasure cinema, also with a nihilistic ending. #4: HELLO, DOLLY! - I'll get to this. #5: BOB & CAROL & TED & ALICE - a film about infidelity, group sex, and a hippie like cosmicism.

HELLO, DOLLY! made 26 million dollars theatrical. That is huge in 1969 dollars. The problem is that the production budget was an inflated 25 million dollars. When you add P&A (prints and advertising), the film was a financial flop. I think monetary success can play a big role in critical response. I also think that the fact that the film lost serious money, plus it was so unlike anything else in the movie theaters that year, really lead people to kind of hate this film. It felt old school, but in a bad way. Now, looking back without the burden of "at-the-moment" opinion, nor caring about the financials, I think HELLO, DOLLY! is a wonderful film!

I'll start with a confession, I have a bit of a crush on Barbra Streisand. i always have (should I mention that I am straight?). Nonetheless, she really shines in this role. It does feel like it was written for her. She handles the rapid-fire, rambling lines like a pro. I haven't heard dialogue this fast and this entertaining since Rosalind Russell in HIS GIRL FRIDAY.

The plot of HELLO, DOLLY! goes as such: A "half millionaire" has acquired the services of a woman, Dolly, to help him find a wife. It quickly become known that she has no intentions of finding him a wife other than herself. There are entertaining side plots about his two aloof store clerks, Cornelius and Barnaby, and their quest to have a day of adventure and even kiss a girl. They meet a hat maker and her assistant, and of course fall in love. The hat maker just happens to be the woman Dolly was falsely setting up with the rich man, all of which in order to make her master plan work out. It is contrived, but wonderfully chaotic.

Walter Matthau has the role of Horace Vandergelder, the rich man. He is a bit miscast. He doesn't have the most charming singing voice and he dances like a 60 year old horse. But its Walter freaking Matthau so he is still engaging and charismatic. The rest of the cast was brought in more for their singing and dancing than for their acting, but they all work together pretty well. But there is no secret that Babs is the star of this production.

Being that it is a musical, how is the songs and dance numbers? Splendid. This movie had a bit of weird nostalgia for me because two of the songs were purposed by one of my favorite films, WALL*E. I found myself getting emotional about robot love during this movie. But Pixar used these songs with good reason. They are romantic, funny, light, and horribly catchy.

The production itself is lavish. It's no wonder the budget was through the roof. You can see where the money went. This is a huge film. The dance numbers go on and on, but unlike MARY POPPINS (which I also loved) these advance the plot a bit. The dance style is very specific also. I don't think I have seen anything quite like ti before. I am not a dance critic, but it looked cartoonish in a good way.

If you haven't seen HELLO, DOLLY! and are at all interested in musical theater, it is a delight and a must. If you are a film historian, it is a must. Don't let the critical naysayers of the time dissuade you.