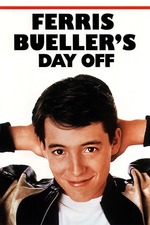 When I first saw this in 2005 or 2006, it was at a friend's house where they were all surprised that I had never seen it before. It felt like a blast of independence to see a film that my mother would have been mortified to see me watch, as she was not okay with me watching anything with crude humor, cleavage, or even a PG rating. We ended up binging through the Star Wars prequels afterwards, but it's a definitive memory in my filmwatching.

Ferris is that person we all know who always gets what they want, and can get away with whatever they want when we generally can't. He represents the party, the wildness, and even the fun we get out of breaking the rules and oftentimes the "confines" of society, though consequences generally come calling when you hang around him. Yes you might miss life if you don't follow him, but you might also miss opportunities for an even greater life if you do, probably depends on the situation and the person.

Sloane is the one who is along for the ride and enjoys the party and Jean is the one who needs to get the opportunity to do something naughty where no one can do anything about it, hence her attitude after her kiss. Cameron on the other hand needs the wildness to help break the stranglehold conformity has on his mind. The film is not only about Ferris' antics, but also about Cameron's liberation from being treated like a piece of furniture in his own home by someone who should love him. I feel a lot of connection with Cameron, having dealt with anxiety a lot since becoming an independent adult. Sometimes I get in a trance where I shut down and shut out the world, sometimes I get mad as a hornet about how I'm treated, I regularly worry about the opinions of others and how my family views me, and I regularly find the need to stand up for myself even if it means serious personal consequences. Cameron is a fantastically laid character.

The music, the shooting, and the location cinematography are some of the best I've seen, with artful and precise camera angles really showing how great Hughes could be. I can't count how many times I've quoted this movie over the years, but lets under-exaggerate and call it "a lot". The movie is a classic for a reason.