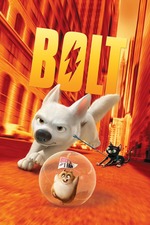 Another one of these half-formed films; the last half is good, but the first half is way too tiresome with Bolt in denial. Once he actually gets to deal with who he is, there are some great moments and even some amazing touches (like Bolt losing his lightning-stripe just when he's accepted his role as a normal dog). The characters and their relationships gels better after a while, and you come to kinda love 'em all. It's not a terrific film, as its jokes are mostly groan-worthy and the first half is mostly a repetitive struggle to get through, but it has enough going for it to tip over into "decent movie"-territory. Huh, look at that, I changed my mind half a star during the writing of this review. Who'd have thunk.