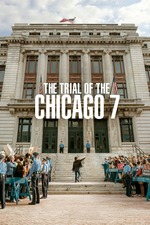 This has its moments (most involving Yahya Abdul-Mateen and Sacha Baron Cohen), but ultimately, to me, fails both as a standalone narrative and as representation of larger issues. The disappearance of Bobby Seale two thirds of the way into the movie showed that the film has as much concern for him as the judge did. I think they made the movie about the wrong 7/8ths of the defendants.

I understand the appeal of digging into the different facets of a protest movement, but I just don't think the characters were fleshed out enough to really do that. The Hoffman-Hayden showdown is the closest they come to something insightful.

Of course Sorkin directed a legal drama. His writing style is on full display here, but directorially this left a lot to be desired. There were way too many cheesy lines for my taste, even as somebody that is generally a fan of Sorkin.

Catch Me If You Can