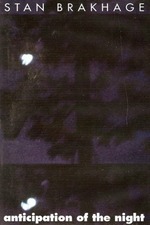 Anticipation of the Night

Second Brakhage. Re-read Sitney's chapter on the lyrical film afterwards and while it does give the proper historical framework, neither he nor Brakhage's own poetic conceptualization really conveys how intuitively the montage plays. I'm so used to the concept of plastic cutting by the 60+ years of a-g which drew on Brakhage's formal innovation that I expected something more barren akin to sketches in a scrapbook than Brakhage conjuring up a diarist's compulsion to personal excess. Grounded by psychotherapy (»Freud has never meant as much to any other filmmaker.«) and bribed by the idea of a narrative, but the image remains at the forefront, in constant transition, evermore becoming. I confess to committing my first cardinal sin and after about ten minutes scored this to Dan Deacon's Bromst, which made for some of the most ecstatic viewing in a while, image and sound often syncing up with the exact right intensity. There's something so true, so ontologically sound in the way Brakhage cuts light and movement in relation to each other, making recourse to the medium and its monumentality. Did not expect this viewing to be as meaningful as it was, but here we are, lost and found.

The Woman Who Ran