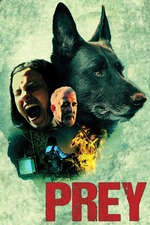 This was a bleak but entertaining movie.

With some touches of Cujo and Monkey Shines in the mix, this movie gave us some decent thrills and suspense for a short run time of 87 minutes.

Prey aka Ropes was something that you would think was a Stephen King and George Romero homage film. It was quite predictable on a lot of the story and scenes, though throwing in a ferret was definitely different.

The secondary story of how Elena ended up in the wheelchair was okay and worked on her mental breakdown besides fearing the rabid dog. I would rate this movie a bit higher than I did if it wasn't something already done. Granted adding the backstory and haunting of guilt was good. Along with the dog being pretty smart on a few scenes but it didn't stick that landing good enough to be a rewarding end.

Overall, the movie was a good watch. Definitely something worth seeing for the set up and story but don't get disappointed to much on the ending as it left the movie bleak by the end of the runtime.