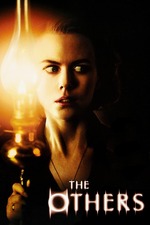 The only thing that moves here is the light.

Where to begin! This is something I regret putting for as long as I have. Haunted house flicks seldom do much for me, but The Others is so wonderfully crafted - from the atmosphere to the performances to the script!

The premise is excellent and adds another layer of tension to what might otherwise be a typical narrative. In most haunted house stories, the family has just moved to the home, or perhaps the protagonist is a real estate agent trying to sell the home. This immediately begins to deteriorate the suspension of disbelief because we as the audience want to scream and shake the protagonists, telling them to just leave. The Others tries a different tack to great success: the family has been in the home a number of years now with no incident. More compellingly, the two children, Anna and Nicholas, suffer from a rare medical condition that makes them essentially allergic to all strong light sources. Not only does this twist on haunting tropes make for a more compelling story, but it also allows the filmmakers to play with the classical horror visual elements of light, darkness, and shadow. The film absolutely capitalizes on this and the atmosphere and script work together in perfect harmony, using heavy silence and oppressive fog to punctuate the bright/dark visual balance.

The terror ramps up slowly and plays it a little by the numbers - piano playing itself, doors opening and closing, kids saying spooky stuff, you've seen this all before. Nicole Kidman is deeply unsettling, and the supporting servants play their parts with subdued dread. A lot depends on the child performances here and unfortunately these children aren't entirely up to the task. They shine in a select few moments but overall are fairly typically weak child actors. Alas! To make up for this, the script gives quite a bit of depth to both children as well as their mother. The film holds up despite some weak acting as the terror escalates into the final act, a nailbiting, whirlwind of terror that culminates with a beautiful twist. I won't say too much more on this as it really must be seen first, but it is not only a fitting and beautiful end to the story, it is a fascinating take on haunting films. This is perhaps one of my favorite pieces in that particular subgenre.

With a meticulously crafted atmosphere and script, The Others really is a shining example of what ghost stories can be: beautifully emotional and tragic, with a healthy dose of real scares. Absolutely recommended, even if you're turned off by the haunted house label: The Others really won't dissappoint.