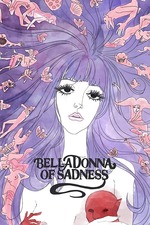 ________
It is quite safe for me to say that Eiichi Yamamoto's 'Belladonna of Sadness' is one of the most uncomfortable films I've seen recently.
The manner of things. Unevolved. Unchanged. The way it has always been. The way it is. The way it will be. The world's machinery running on fumes of murder, rape, injustice and perversion. And that machinery never changes.
This film is an erotic, Japanese rock opera that relives a medieval story almost completely through still, hand-painted images, great voice-over narrations and the occasional animation that is accompanied by a psychedelic, prog-rock score that feels both jarring and at-home in the film.

The first thing to know, in my opinion, that would prevent misinterpretation is that the film is loosely inspired from a non-fiction French book from 19th century called "Satanism and Witchcraft", written by Jules Michelet. According to the book, medieval witchcraft was an act of popular rebellion against the oppression of feudalism and the Roman Catholic Church. This rebellion took the form of a secret religion inspired by paganism and fairy beliefs, organized by a woman who became its leader. Though considered inaccurate today, the book is influential for being one of the first pieces of literature to portray witches in a sympathetic light.

The second thing to know is that “Belladonna of Sadness” was released in a pivotal time for it's own story: in 1970, the women's liberation movement in Japan had begun as women marched through the streets of Tokyo. And thus, as such, the movie's intentions were very much grounded in the pro-feminist movement wherever it's execution may have ended up.
.
The third and final thing that doesn't matter if you know or not is that there are a LOT of parallels between the protagonist, Jeanne's story and that of Joan of Arc - who, if you know it, is one of the oldest feminist icons, a rebel and a leader who was burned at the stake by the English after being accused of Witchcraft.

B) How Far is Too Far?
__________________
All set? Okay!
Belladonna is, in a way, an artistic wonder. An achievement. With 70’s jazz-psych-pop music, the film goes through very long montages that are completely expressionistic, psychedelic, abstract and chock-full of symbolism. It's pretty much a pinnacle of surrealism, and that is from someone who's seen Satoshi Kon's entire filmography.

In medieval era France, Jean and Jeanne are a newly wed couple, happily married with "God smiling down upon them." It doesn't take long, however, for it all to turn into a complete nightmare. The Lord of their village claims prima noctae - a medieval European ritual where the King or the chieftain held the right to "deflower" all newlywed brides under them.
Taken away, Jeanne is horrifically gang-raped. Helpless and broken, Jean eventually vows revenge and makes a deal with the Devil. All of which would ultimately pave way for her eventual sexual and personal liberation.
.
HOWEVER, it is VERY graphic. There's no way around that. Films so often resort to exploitation clichés such as rape and perversion to *SHOCK* the audience, just for the sake of it. This film has several rape scenes (it frankly, reminded me of how awful and wild medieval era really was) But I would say that perhaps only the first of these scenes are non-exploitative in nature. But I'll have to admit, the very first rape scene was horrid. It was not realistically brutal or gritty. Like the film itself, the scene is purely abstract. There is a particular moment, where Jeanne's body is shown to be literally ripped apart in two with blood and organs spraying everywhere. It's downright terrifying and so painful to imagine. I was simply sitting there, queazy but looking at the screen. It managed to capture the mental trauma, and make me understand and *feel* the real horror and pain of rape more than any other film ever has. So let this just be a warning, this is not at all a film for the faint-hearted. And it affected me so much, so I can't imagine know what reaction it would draw from women.

Now that scene would be fine on it's own, but the film adds up more and more such scenes and in a way starts to relish in it's own excesses. All the way till it's halfway mark, which is when our protagonist Jean finally decides to completely give herself up to the Devil. Frankly, it is this first half of the film that I really have most of the issues with. Despite being pro-feminist, the sheer excesses it dabbles in - coupled with too much overt symbolism (the devil is shaped as an erect phallus) just makes for an exhaustive watch. It falls into it's own pattern and soon gets a little repetitive as well. Well, all I'm saying is that despite well intentions it didn't escape the so called "male gaze". The first scene was brutal in a meaningful way, but the sheer gratuitousness later just unties it.

C) Sexual Liberation and Audience Integration
_____________________
The opening is a water painting style, showing the brilliance and happiness of Jean and Jeanne. They get married and are overjoyed. The funky 70’s music and upward sliding shots give a lot to look at, but also orientate the audience to what will be a long ride of moving camera over long prints.

This however soon fades into the more predominant artstyle of the film - that of faded white borders, minimalistic sketches and images that focused only on the most important set-piece of each scene. Often reducing it entirely down to just a few sketched lines outlining a character's face. The colors in these segments are more muted, indulging in swathes of blues and grays. The added fading of the images adds to the notion of how Jeanne is walking through these events almost as if in a haze.

The highlight - Animation-wise - comes almost 50 minutes in, as the film renders a horrifying but expressionist version of the Black Death that swept Europe at the time. Its utterly amazing to behold.

This all leads to her meeting the devil who appears - as a phallus - of all things. A sign of her burgeoning sexuality and it's unification with her identity. Off with a rocky start, the relationship between Jeanne and the devil (a.k.a. her sexuality) swells and recedes. But the more she let's the devil in - the longer this phallus becomes - and the bolder and more confident she gets. This would carry through the whole film, and mixes the idea of sexuality with an independent mind and confidence. As her sexuality grows, so do her sense of individuality, pride and self-determination.

Perhaps one of 'Belladonna's biggest achievements is that it puts the audience in that exact frame of mind that the film wants you to be in. It is true that the first half of the film is unnecessarily excessive and gratuitously oppressive. It is true that the second half of the film ends up feeling lighter (even though it Also has its excesses lol. But of a different kind). All of this is to put us in the exact frame of mind as Jeanne. After nearly 45 minutes of depressing, sexual torture that we feel as much as Jeanne, the scene of liberation comes. And it's vibrantly energetic and upbeat. We, along with Jeanne, are "liberated".
It is also to the film's credit that it is able to build such an extremely unique atmosphere. It somehow fuses wildly different things such as ancient tableau-style paintings, French countryside, Japanese narration, an opening pop-song ballad and continued avant-garde, experimental '70s Jazz and psychedelic rock.

All of which cumulates into it's final scene, which is really unexpected and yet feels perfectly at home. There is an utterly beautiful moment where a large group of women look up and their faces turn into Jeanne's. A perfect manifestation of Feminine solidarity and a great way to tie up it's themes of oppressive patriarchy, class hierarchy, medieval brutality and women's liberation movement into a more abstract, universal concept. There's after all no better way to tie up such a film than with the landmark French Revolution.

It is difficult to not overstate the importance this film had on anime and anime films in general. Studio Ghibli's Hayao Miyazaki’s first directorial work framed his lead woman in Lupin III after 'Belladonna' . Ghibli's other pillar, Isao Takahata would revive the white-imaginative lack of drawing style in his works 'Only Yesterday' and 'Tale of the Princess Kaguya'. Takahata in fact discussed this style a lot in interviews, which used a water color and fluid ‘artist rendering’ style of animation. It's a unique and fascinating way to tell a story.
Both of these directors would carry the torch of Feminism ideals and strong lead women throughout their careers.

Yes, it is indeed one of the most uncomfortable films I've had to sit through in recent memory. Whether if it's truly a feminist movie or an exploitation of feminist movies, I'm not sure. It certainly crosses the line sometimes.
But does it still hold up, nearly 45 years later? If you can sit through it's really uneasy and excessive scenes, then I'd say it does.