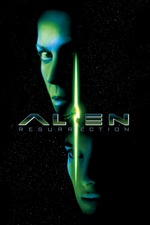 It is likely that the average fan of the original Alien had already found themselves having somewhat of a Talking Heads moment [“Well… how did I get here?”] by the time that they stumbled upon Resurrection. It is a strange beast, at once abominable and yet somehow infinitely more fun than Alien 3: unlike that film, however, which at least boasted some semi-competent writing and an understanding of the Alien universe, this is essentially the exact kind of mindless, forgettable [thank God!] kitsch that the late-90s seemed to see fit to spawn on the world in spades. What a God-awful film, and yet, what a whale of a time I had watching it. <3 <3