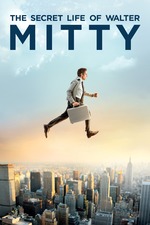 The Secret Life of Walter Mitty

“How was the... daydreaming going?”

The Secret Life of Walter Mitty starts out quite amazing, it’s beautifully shot and just such a calm and quiet opening – unlike most Ben Stiller movies. And when I say “starts out” I mean about the first three minutes or so, because after less than five minutes our hero Walter Mitty has crashed into a burning building in a day-dream. Within those first five minutes, Stiller captures the great and really disappointing things with The Secret Life of Walter Mitty and I guess that’s somewhat impressive.

Whenever Stiller slows down and let the movie breath it’s quite amazing. Stiller shows what a great actor he’s capable of when he’s given a bit more subtle characters and the beautiful and at times minimalistic cinematography gives the movie a great style. Iceland (though said to be Greenland in the movie) is just stunning and the barren lands fits perfectly into the mood of The Secret Life of Walter Mitty.

That is, the good mood of the movie. Because oh how I wish Stiller would’ve focused more on those stuff, but this movie is sadly also filled with his usual schtick of silly comedy. The day-dreaming can be creative and pretty spectacular – but is featured so much that it quickly becomes predictable, adds nothing to the story and just clashes with the subtle parts of the movie. We get a forced love-interest (which wastes away Christen Wiig’s potential) and just unnecessary bits of simple Ben Stiller-comedy that drags the entire movie down.

When The Secret Life of Walter Mitty is just a silent, thoughtful Ben Stiller on a bicycle in gorgeous Icelandic environments it’s really amazing. But when The Secret Life of Walter Mitty also is a bunch of horny Chileans looking for an Icelandic strip-club it’s just so tiresome. It never feels as if the movie dares to go all-out and be an atmospheric mood-piece without much story. Because at its core, the plot of the movie is pretty thin and nothing to care about but whenever the movie goes for emotions and atmosphere you don’t care about that – as soon as it tries to be a silly comedy though, it falls into tired clichés and feels way too long for its own good.

Take away about half of the stuff in The Secret Life of Walter Mitty and you’d get an amazing movie filled with great cinematography and something new from Stiller. But sadly we’re also stuck with the same old comedy he’s been doing for years and it just makes this a pile of wasted potential.