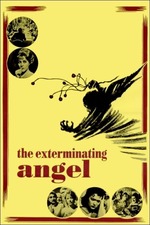 Browsing Criterion I lit on this, a film I've read about and seen referenced over the years but never watched. Buñuel's surrealism is beautifully restrained. The premise itself — people assembled for a dinner party find themselves physically or psychically unable to leave — I wouldn't call surreal, so the only overtly surreal elements are the apocalyptic ending, a bear and some sheep. There's no call for diving suits and anteaters: the absurdity and horror are generated entirely by the assembly of nobs, the absence of servants, and the collapse of the social code. The real dystopia was inside us all along.

The allegory isn't subtle (though the way it's presented is) but it is very effective. This is what happens when the nobility — nominatively represented by Señor Nóbile and his wife Lucía — pull up the drawbridge. As the physical and mental state of the guests disintegrates, they re-enact Lord of the Flies with the discreet charm of the bourgeoisie, culminating in the firelit butchery of the roast lamb scene. The way Buñuel coordinates 20-something bodies in such a confined space is quite incredible, and the script is almost as tight as the choreography: a bore waffles in the background about "the fauna in Romania... due to the climate extremes..." and the dying Leonora importunes Dr. Conde "when we get to Lourdes, I want you to buy me one of those washable plastic virgins..."

The final scenes in the cathedral bring together the unholy alliance of church and (police) state as the lambs walk literally to the slaughter. The screen fills up with dreams; we see a saw working its way through a skull, perhaps to relieve pressure or to unleash nightmares. As an eschatological climax it's right up there with The Day of the Locust. Both films are righteous attacks by outsiders on seemingly impregnable institutions; I wonder if Buñuel had read West's book. He surely had read Golding's. It's impossible to definitively trace the web of influence, but I'm certain The Exterminating Angel was in Ballard's mind when he wrote High-Rise.