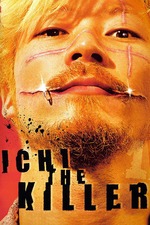 Honestly, without exaggeration, the most depraved film of all time. I've been putting this off for six years and after testing the waters by venturing into Visitor Q (Sorry God), I've finally found the guts to watch it, turns out it's just as twisted, absurd and gory as I've expected it to be; I beg you, don't see me as some sort of delusional maniac for saying this, but I love it, really, every inch of it.

Most shocking of all, Ichi the Killer made me want to re-evaluate my life because, admittedly, I found myself laughing out loud a couple of times at the ridiculously dark humor, the excessively cheap presentation of some of the gore, and the performance of all the weird, perverted characters involved (caught a rare sight that is a young Jun Kunimura with hair!). I thought I've seen it all with Sion Sono's filmography, I was wrong. Takashi Miike is even more insane, yet, similarly, an absolute genius at the same time for being able to professionally craft an arthouse film using such an unhinged subject matter! Now I feel dirty all over, please avoid at all cost, curiosity has cost me my innocence, no religion can save me from this one.