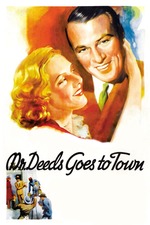 Capra gave us some really nice masculine ideals. His films have honest, kind, earnest, and loving men, men who are not afraid of their emotions until outside pressures make them afraid. Longfellow Deeds has his innocent small town values but he knows when he's being taken for a ride, and I liked that. He's naive but he's also an adult.

Jean Arthur is, like ALWAYS, absolutely perfect in every single way possible. The presence she brings to a romance is consistently brilliant. She is one of my favorite actresses ever, and she never disappoints. I love her in Mr Deeds and in Mr Smith, where she's whip smart, damn good at her job, but still is able to learn something emotionally from the man she loves.

This film is also much like My Man Godfrey in its portrayal of the Great Depression, with both films indulging in the fantasy of the people (seeing a huge house and having a blast with its opulence) while also painting the rich as ridiculous moochers just looking for new ways to make more money. I liked the film's sympathy toward poor farmers (and poor immigrants) though every "forgotten man" Deeds helps and speaks to is white, which shows where progressives were willing to draw the line when it came to helping the marginalized.

Overall, it's a beautiful love story with a main character who we can still learn a lot from.

The Adventures of Prince Achmed