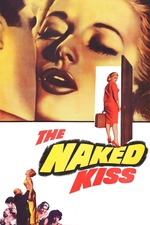 "I'm a stranger in town. Don't you need my character references?"
"Your reference is that face, Miss Kelly."

"Your face might fool a lot of these people, but not your body. Your body is your only passport."
"You're right. I can renew a passport, but I can't renew my body or my face or my health."

"Kelly, you baffle me. Intellect is seldom a feature of physical beauty. And that makes you a remarkable woman. The most interesting contradiction I've met in years."

Samuel Fuller is such an interesting director. This is now the fifth film I've seen from him, and every single one has been so well made and so subversive for its time. All of his work that I've seen is interested in tackling topics of injustice, whether that be racism, classism, police violence, or sexism. Many of his films are flawed, in part because they are decades old, but they're also thoughtful works of art, and wholly entertaining movies at the same time. The Naked Kiss is no exception, and though I do think it has its flaws, it's also such a stylish, wonderfully pulpy film, and Constance Towers in the lead role as Kelly is fantastic.

The Naked Kiss is about Kelly, a sex worker who leaves town and her pimp to live in the seemingly idyllic suburb of Grantville. Kelly's first and last customer in town is police captain Griff, not because he arrests her for prostitution, in fact he refers her to a brothel across state lines, but because she decides she wants a new start in Grantville. She finds major success in orthopedics and begins a relationship with the rich playboy and philanthropist, Grant, whose family the town is named after. Griff is displeased to see Grant, a powerful and wealthy man, court a former prostitute. From these early stages of the narrative, Griff becomes an interesting antagonist, and a personification of the justice system's way of policing women's bodies and criminalizing sex work, and the hypocrisies within: Griff partakes in Kelly's services but also mistrusts her because of them, and he is prepared to use her past against her to keep her from upward social mobility and a new life.

I included the quotes at the beginning of the review as examples of how the theme of beauty, in specific Kelly's beauty, is treated throughout the film. It is an advantage to her; as shown by the first quote, her face comes across as trustworthy enough to allow a woman to rent her a room, but it is also something to be controlled. Griff is the one who calls her body her passport, condemning her not only for her past sexual activity, as if her former johns have all stamped her body with their presence, but also condemning her for being desirable at all, her crime being that she made him want her. Kelly is caught between contradictory expectations for women: to be beautiful and inviting but to also be chaste.

The way the film handles sex work is complicated. I'd say generally this is a fairly negative portrayal of sex work in a way that unfortunately ultimately feels reductive, but there are also some important nuances here, such as the time period the film was made in released in, when the US was even more hostile to sex workers than it is now and thus women were more likely to be exploited through it, and also that Kelly's anguish around the idea of other women getting involved in sex work seems less about the work itself and more about the fraught and difficult to avoid systems of exploitation using and abusing prostitutes. The film opens with Kelly taking money that is rightfully hers from her abusive pimp who has been stealing from her, and as soon as she arrives in Grantville and attempts working her job independent of a pimp she is immediately told to get work at a brothel run by the madam Candy. Kelly is simply being forced to move from one relationship where someone is profiting off of her labor to another. On one hand, her nightmarish description of life as a sex worker being soul sucking is certainly sex negative, a moral judgement on those in that line of work, but it can also be interpreted as the traumatic exploitation being the thing that is soul sucking, not the actual work itself.

The end of The Naked Kiss is what I found disappointing. Griff, who has been the antagonist for the majority of the film, the one constantly trying to keep Kelly from success, peace of mind, and happiness, has what felt to me like an unearned semi-redemption. Griff's entire purpose in most of the film is to serve as that personification for the powers that be keeping sex workers down. I suppose Grant shifts to become that personification in the last act of the film, though he is more of a general metaphor for unearned and misused power and influence, and because of the shift villainizing Grant, Griff becomes an unlikely ally for Kelly. However, after seeing Griff's constant disrespect of Kelly and the way he is hypocritically enjoying the services of prostitutes while symbolizing all that criminalizes them, his late in the film allyship felt as if it weakened the themes of earlier portion of the film.

The Naked Kiss is the type of work that only a director like Fuller could offer. Bold, shocking, flawed, and complicated, Fuller's work demands a critical eye while also being undeniably enrapturing.