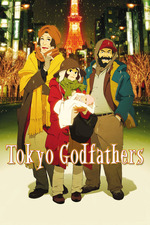 Satoshi Kon’s work is often defined by its exploration of human nature. His movies are often based around how we choose to spend our lives and what it truly means to be human. We see how the lack of balance in a person’s life can lead to an unfulfilling existence in Paprika. We see the contrast between how we present ourselves to the world versus who we actually are in Perfect Blue. And in that way, Tokyo Godfathers feels at odds with the rest of the director’s portfolio. Kon’s other films are about showcasing the uglier side of humanity, and how corrupt people can become when they let their selfishness consume them. Tokyo Godfathers, on the other hand, is about portraying the best of humanity even in the most dire of circumstances.

The film centers around three homeless people on Christmas Eve. This includes a runaway from home named Miyuki, an ex-drag queen named Hana, and an alcoholic named Gin. Together, they find an abandoned baby in a dumpster, and they vow to return the baby to its mother. What stands out immediately about the main trio is how lovable, yet flawed they are. They all have their own problems and demons, which makes them come off as real people rather than just characters on a screen. Despite their inherent flaws, they still try their best to do what’s right for this baby, no matter where their journey takes them. Throughout the story, we see them confront their dark pasts, as they attempt to either reconcile with it, or run away from it. Their stories are able to convey genuine emotions, and seeing them come to terms with who they are leads to some of the best scenes in the film. I also really appreciate how perfectly balanced their arcs and screen time are. There is no one main character, as each member of the trio gets just the right amount of focus for their individual plotlines to work.

The main characters’ stories really do help highlight the film’s central ideas. The world is not kind to these outcasts, as we see how most people around them see them as trash. This life has given most of the characters a very cynical edge; they see their world as a hopeless hell hole beyond the point of redemption. But if their actions throughout the film prove anything, it’s that there is still hope left in the world. Through their seemingly never ending trials and tribulations, they still manage to help out where they can, and they remain mostly dedicated to saving a baby who was forgotten by the world. The characters aren’t perfect saints or anything; in fact, some of them have done some truly horrible things. But their stories truly show how everyone, within their heart, has the ability to do good. The world will always get us down, but it's how we stand up to and try to recover from hardship that truly defines who we are.

With such a dark world on display here, the film still manages to keep an incredibly lighthearted tone throughout. While I wouldn’t quite classify it as a full-on comedy, there are quite a few jokes throughout the film that kept me thoroughly entertained. The characters not only work off of each other in an emotional sense, but in a comedic one as well. They often have really funny back-and-forth with one another, which really helps strengthen the familial bond between them. The animation also helps heighten both their uncertain circumstances and the comedy. The film has a really pleasing color palette that can really help set a consistent tone for the film. The character designs often lend themselves really well to visual comedy, whether it's playful slapstick or exaggerated reactions. The music is also really great here, with the soundtrack mostly consisting of classic Christmas songs that really do contrast some of the film’s darker moments really well.

Satoshi Kon has proven yet again with Tokyo Godfathers that he was and always will be one of Japan’s most inspired anime directors. It shows how, even in the darkest of times, hope can still shine through, and how that hope can come from nearly anyone, even those who are forgotten by society. It stands as not only one of the best Christmas movies of all time, but a true masterpiece as well, and I really do look forward to checking it out every holiday season.