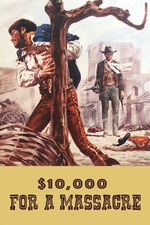 10k For A Massacre is a better than average, spaghetti western.
Its a bleak, violent, off kilter western.

Bounty hunter Django, (There seen to be a lot of dudes named Django in the old west.) is hired to retrieve the daughter of a rich baron, from the hands of a Mexican bandit.

This is a very violent gunslinger flick, with an intriguing villian, the Django in this actually looks like Franco Nero, and there is a weird soundtrack as well.

It's good stuff check it out.